Did YOU Know Our Low Cost Spay/Neuter Clinic ALSO Fixes Rabbits-Mice and Rats? Oh My!

In general there are plenty of reasons to spay/neuter your small pets – whether its a mouse/rat or rabbit. …

Many people are surprised to learn that it’s a rabbit’s best interest to have him neutered or her spayed. But it’s as true for a rabbit as it is for a dog or cat.

Depending on his/her genetic makeup, a rabbit will reach sexual maturity somewhere between the age of 3 to 8 months. Once the sex hormones start flowing, expect to see behavioral changes. Some may be cute: a sexy rabbit may circling your legs, honking a little love song, be very needy and cuddly and follow you around incessantly. Other puberty-related behaviors are not so cute: a honking, singing bunny circling your legs who finishes the symphony with a flourish of urine spray and then sits there looking up at you for approval of this sign of unconditional love. And some hormone-related phenomena are simply dangerous to your bunny: unspayed, unbred female rabbits have a very high risk of uterine cancer.

Although not all rabbits exhibit objectionable behaviors upon reaching sexual maturity, many (if not most) do. One can expect to see the following behaviors once those sex hormones kick in: 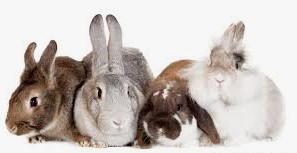 When intact (rabbits that are NOT fixed), both male and female rabbits usually mount one another endlessly out of sex drive and/or to establish social dominance. Same-sex pairs who tolerated each other as babies will often begin ferocious fighting upon reaching sexual maturity. This can result in permanent “unbonding,” not to mention serious physical injury.

Opposite sex pairs will begin reproducing as soon as they mature. Left unchecked, an unspayed rabbit and her intact female descendants can produce more than 1300 offspring in a year. Over the course of five years this number balloons exponentially to more than 94 million! (If you don’t believe me, check out the calculations.)

A well-meaning, if naive, person might think it’s a simple matter to find homes for those babies born so that a female rabbit could be bred “just once” or “so the kids can witness the miracle of birth” (For a balanced view, be sure to take the kids on a field trip to the local animal shelter’s euthanasia rooms so they can also witness the “miracle of death”.).

Finding a safe forever home for a rabbit is not simple.

Thousands of sweet, perfectly wonderful rabbits (purebred and mixed breed alike) are abandoned at shelters every year, and perhaps an equal or larger numbers are “set free” in parks or neighborhoods to face an death from predators, disease and starvation. For every rabbit produced by a casual breeder, another is put to death at an animal shelter or dumped in a park to die, because there are simply not enough homes for all of them.

Unspayed female rabbits have a very high risk of uterine cancer. Our vets commonly see uterine changes and tumors in unspayed rabbits as young as eighteen months. As the bunny ages, her risk increases, and our experienced rabbit vets report that many, if not most, rabbits older than about four years who are brought in for spaying reveal uterine changes and/or tumors. A rabbit’s reproductive system is evolved for constant reproduction over a relatively short lifespan. When reproduction is thwarted, but the uterus is left intact, the system can go a little haywire. It’s not unexpected.

Unspayed rabbits, and rabbits who are spayed late in life also face an increased risk of mammary cancers, though these are less common than uterine cancers.

Upon reaching sexual maturity, male rabbits often begin displaying mounting behavior (on your shoes, the cat, stuffed toys, your leg, your sleeping head…), marking territory with urine and producing a musky sex odor. Male rabbits, like females, can become very aggressive when the testosterone kicks in, and the only truly viable solution for this problem is castration, also known as neutering.

How can spaying/neutering help?

Modern rabbit medicine is far more sophisticated than it was even ten years ago, and many excellent vets are now spaying and neutering thousands of rabbits a year without incident. Still, no surgery is 100% risk-free, and each rabbit caregiver must make the decision to spay/neuter on an individual basis, in consultation with an experienced rabbit veterinarian. But there are plenty of reasons to spay/neuter your rabbit.

Thousands of rabbits are abandoned every year when they outgrow their Easter Bunny cuteness. You will never have to worry if your rabbits offspring will suffer a terrible death after being abandoned in the wilds of suburbia, being dumped at a pet store to be sold as snake food or being euthanized at an animal shelter if you don’t contribute to this problem.

And just so you know…. 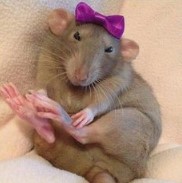 Research shows that hormones affect the development of a number of different types of cancers and benign tumors in human beings, dogs, cats, rabbits, and of course, rats and mice. In human beings, it is accepted that the chances of getting breast cancer are increased by early onset of menstruation, late menopause, and having/nursing no children?in other words, by conditions that allow hormones to circulate for a longer period of time. Women who menstruate later, have early menopause (or hysterectomy), or have children and nurse (and hence, have fewer years during which hormones are active), are less at risk for breast cancer.

Similarly, dogs, cats, and rabbits who are spayed by the age of 6 months have an almost no incidence of mammary cancer. And male dogs who are neutered have, in addition to no chance of testicular cancer, a significantly reduced incidence of enlarged prostate and/or prostate cancer. In rabbits, the rate of ovarian and uterine cancer in unaltered females is thought to be as high as 80% over the age of 4, and dogs and cats are not far behind. Although laboratory tests have given us some of this information, by far the most useful statistics have come from vets and owners who deal with these problems in pet animals in, as it were, the real world. This may be why there is a great deal of lab-based medical information out there about rats and mice, but very little about the incidence of cancer or other diseases in beloved pets. People like us aside, the percentage of small animal owners who consider their rats, mice, hamsters, and gerbils important enough for veterinary care is, unfortunately, very small.

Unless the animals are used in a well-planned breeding program, it is generally accepted that all companion animals are better off surgically altered. 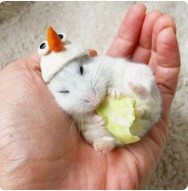 Still, the statistics mentioned here regarding human, canine, feline, and lapine cancers and benign tumors should sound familiar to rat and mouse folks, because little rodents, too, fall victim to just these cancers, or develop benign tumors that can be equally devastating. Mammary tumors and tumors of the reproductive tract are two common causes of death in female rats, and testicular cancer in males is well-documented. It is also possible that many cases of generalized tumors may well have started with the reproductive organs or mammary glands. So although there is very little official recognition that neutering and spaying rats and mice extends their lives, it is simply common sense that what works in every other domestic species should also work with rats. In my own mind, there is no doubt that neutering and spaying rats should have the same effect on these little animals as it does on cats, dogs, and rabbits longer, happier, cancer-free lives.

In addition, it is readily accepted by animal behaviorists that neutering/spaying reduces territorial and aggressive behavior in dogs, cats, and rabbits. It also improves house training, makes intra-species relationships more pleasant, and generally improves relationships between animal and owner by removing the significant distraction of hormones and allowing the animal to concentrate on other things. Unless the animals are used in a well-planned breeding program, it is generally accepted that all companion animals are better off surgically altered. 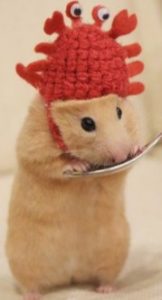 Rats and rabbits do not vomit, there is no risk of aspiration under anesthesia (the reason why humans, cats, and dogs are fasted prior to surgery).